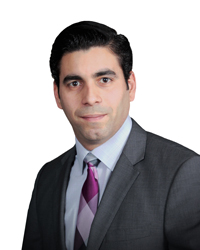 Humberto is the founding partner of the firm. He works out of the firm's Florida office. Prior to founding the firm, Humberto worked as a litigator with Bufete Rivera Torres in Ponce, Puerto Rico handling a wide range of personal injury, family law, condo law, employment and medical malpractice cases.  While pursuing his Master's degree, he also worked as a part-time associate in Maltzman & Partners, P.A. a defense firm in Coral Gables dedicated to Admiralty and Maritime Law.

Humberto has achieved a Master's Degree in Ocean and Coastal Law, including international maritime arbitration from the University of Miami School of Law.  He concentrated his studies mainly in the areas of Marine Insurance, Marine Personal Injury, and International Arbitration. He is fluent in both English and Spanish.